SCUDERIA FERRARI CLUB is a not-for-profit consortium company founded in 2006 by Ferrari S.p.A. in order to coordinate the activities of the many FERRARI Fans who are members of Clubs around the world. Today the Company has over 200 officially recognised clubs in 20 countries. A wonderful mix of different nationalities, cultures and lifestyles united by a mutual abiding passion for all things Ferrari.
By joining one of the OFFICIAL CLUBS, fans become part of a large family that, under the prestigious Prancing Horse emblem, allows them to take advantage of countless services and exclusive opportunities. These include participation in meetings with drivers and the Formula 1 team, Maranello Factory Tours, access to a reserved stand at the Italian GP, a reduced entrance fee for the Ferrari Museums in Modena and Maranello, and free access to the www.ferrari.com community for live news about the Company and sporting activities.

The SCUDERIA FERRARI CLUB – which mirrors the “sporting” soul of all Fans – also organises a large number of other activities including the Scuderia Ferrari Club Soap Box Championship, a fun competition in which members race soapboxes they have built themselves, the Karting Championships and Scuderia Ferrari Club Football Team games (against, amongst others, the Nazionale Piloti, the Italian national racing drivers’ team). In addition, members can take part in the exclusive F1 Show Car exhibitions and emulate their Scuderia heroes in pit-stop races or by driving virtual F1 or GTs in Ferrari Virtual Academy simulators. Thanks to the SCUDERIA FERRARI CLUB’s structure and organisation, life in the pits is now more than just a TV image or something glimpsed from the far-off stands. SFC members can now experience it for themselves and share the fun with other Fans and enthusiasts. Every Club Official Ferrari Passion member also receives a series of unique gifts for the “Genuine Fan”: an individual MEMBERSHIP CARD, personalised lanyard and other exclusive items such as cap, belt, scarf, brooch, and flag, etc.). In addition, the Great Ferrari Family allows members big discounts on purchases made at Ferrari Stores and via the web, on www.ferraristore.com. But the various benefits related to the world of the Prancing Horse do not stop here. Everything is designed to reward the incredibly loyal and irreplaceable PASSION and SUPPORT the FANS give to both the TEAM and the COMPANY 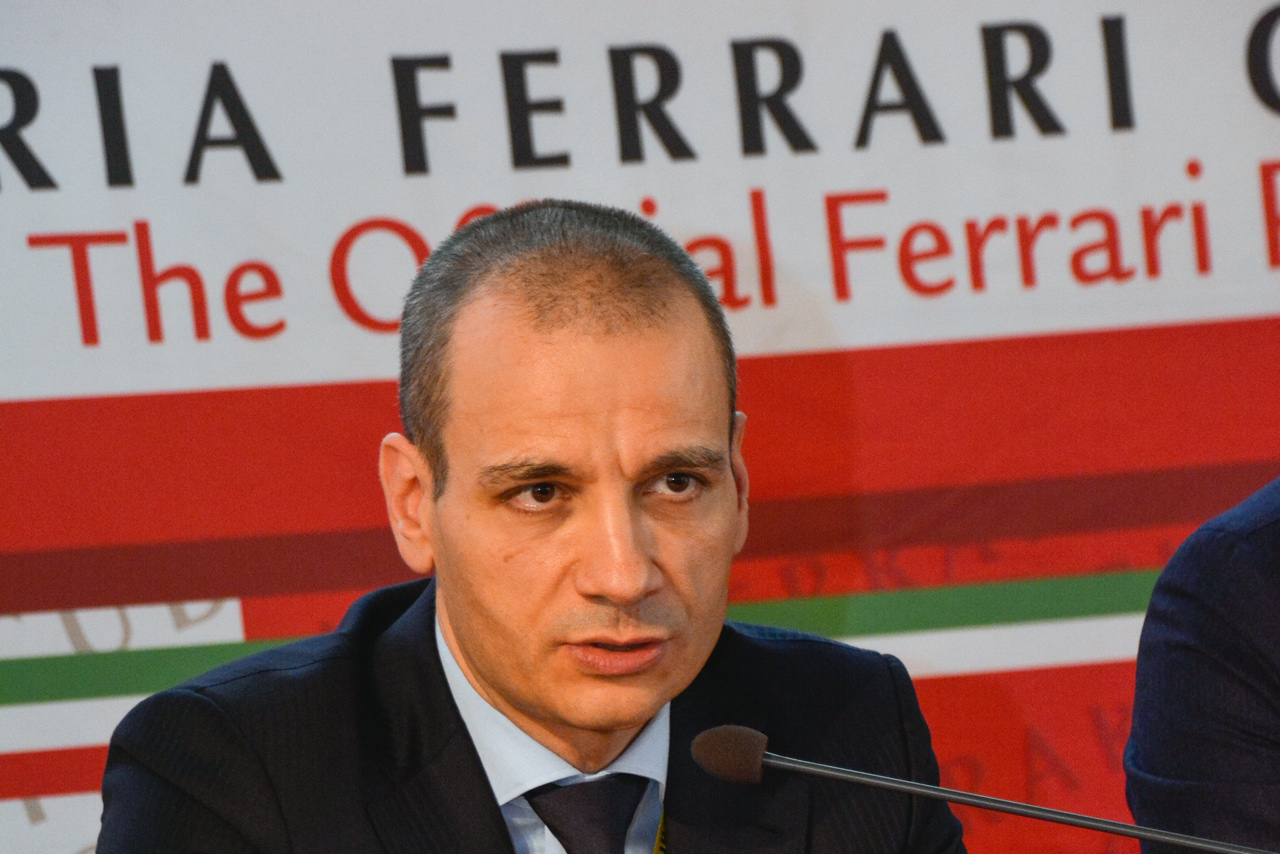 Before joining Ferrari, he held several senior roles in Magneti Marelli, becoming the Human Resources Director of the Automotive Lighting business line in 2012.

Prior to that experience he was the Human Resources Director of the Suspension Systems business line from 2009 to 2012 and the Head of Organizational Development for the Sector Magneti Marelli from 2006 to 2012.

He graduated from the University of Padova with a degree in Industrial and Organizational Psychology.

From a very young age Mauro Apicella showed a great passion for Ferrari, so much so that he persuaded his parents to take him to some Grand Prix races even before his 10th birthday.
Carried away by his excitement and dreams, he immediately decided that his passion would one day also become his job. At 18, after graduating in accountancy, he moved to Milan to study Marketing and Communication at IULM University. He spent his final year in Madrid as an Erasmus student and on returning to Italy, began to think about his thesis. Given that his childhood dream had continued to grow, he based his project on Ferrari communication and – to write the best possible paper – contacted the Company, which offered him an internship in the communication office. In December 2005, he officially began his work experience at Ferrari.
In March 2006, he graduated with top marks and accepted an offer from Ferrari to continue with the company. In November 2006, he was offered a contract with Ferrari Owners Club Italia – the exclusive Club for Ferrari customers. Subsequently, he held various positions within that club and became its head at the beginning of 2008.
Apicella was appointed Head when Ferrari decided to reorganise the Scuderia Ferrari Clubs in 2011, even handing over responsibility for the area to Gestione Sportiva (Sports Management) in 2012. In six years, the number of active clubs and members has almost doubled. Since 2016 he has worked alongside Rivola on the new and fascinating challenge of reorganising the Ferrari Driver Academy.
In 2017, he was joined by Francesca Orlandi, a native of Maranello, with the Company for almost two decades who over the years has held various positions, first in GT and then in Gestione Sportiva. 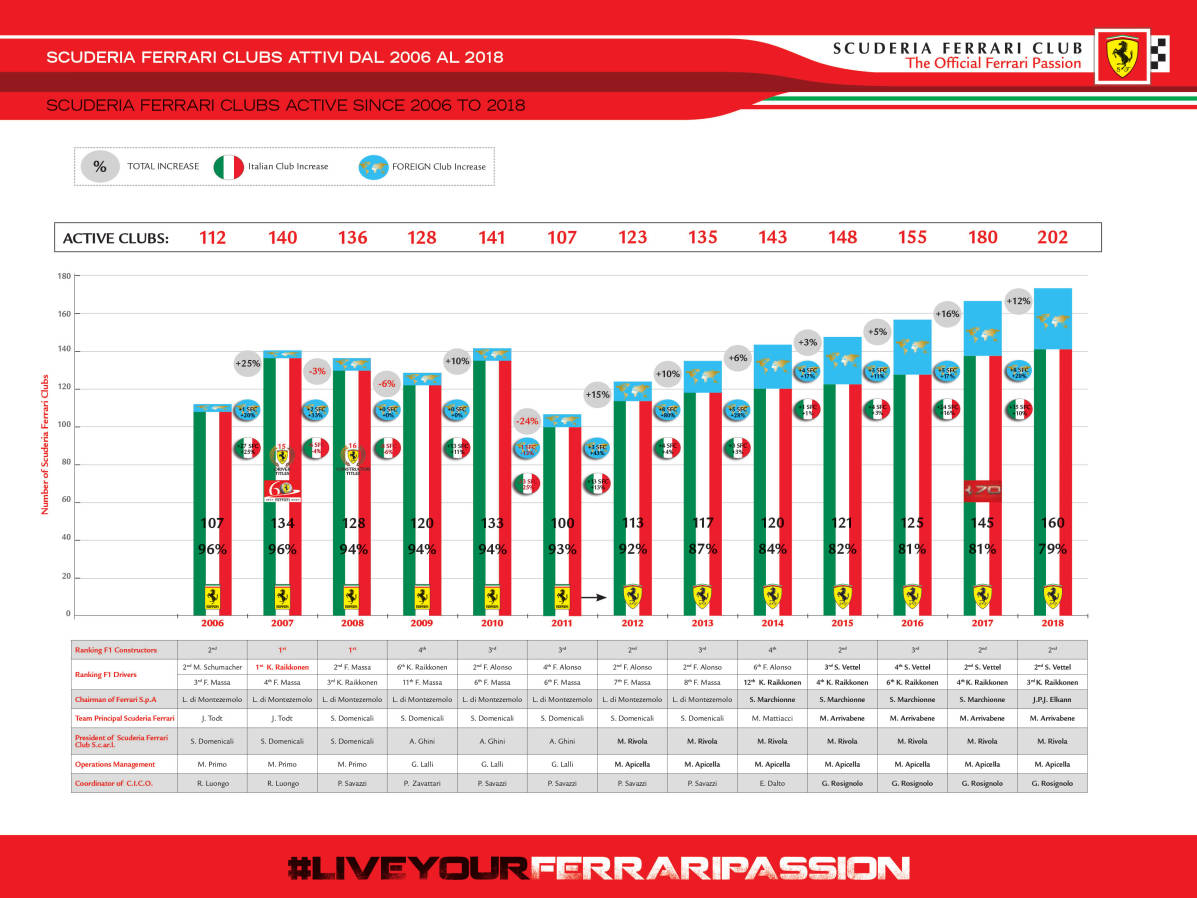 As established in Article 16 of the Statute, the Operational Steering and Coordination Committee (C.I.C.O) is the body that connects Ferrari S.p.A, Ordinary Members/Scuderia Ferrari Clubs and the respective territories in which they are domiciled. It has consultative, territorial coordination and planning direction responsibilities. The C.I.C.O. is made up of both a regular and a substitute representative for each Italian Region and likewise for each Foreign State in which Clubs are domiciled.

The main responsibilities of the C.I.C.O. are as follows: